INDICATIONS AND USAGE
CYRAMZA® is a human vascular endothelial growth factor receptor 2 (VEGFR2) antagonist indicated:
• as a single agent or in combination with paclitaxel, for treatment of advanced or metastatic gastric or gastro-esophageal junction adenocarcinoma with disease progression on or after prior fluoropyrimidine- or platinum-containing chemotherapy.
• in combination with erlotinib, for first-line treatment of metastatic non-small cell lung cancer with epidermal growth factor receptor (EGFR) exon 19 deletions or exon 21 (L858R) mutations.
• in combination with docetaxel, for treatment of metastatic nonsmall cell lung cancer with disease progression on or after platinum-based chemotherapy. Patients with EGFR or ALK genomic tumor aberrations should have disease progression on FDA-approved therapy for these aberrations prior to receiving CYRAMZA.
• in combination with FOLFIRI, for the treatment of metastatic colorectal cancer with disease progression on or after prior therapy with bevacizumab, oxaliplatin, and a fluoropyrimidine.
• as a single agent, for the treatment of hepatocellular carcinoma in patients who have an alpha fetoprotein of ≥400 ng/mL and have been treated with sorafenib.
DOSAGE FORMS & STRENGTHS
Injection: 100 mg/10 mL (10 mg/mL) or 500 mg/50 mL (10 mg/mL) solution in a single-dose vial.
Manufactured By: contact Eli Lilly and Company
Prescribing Information URL: Click Here

Ramucirumab (trade name Cyramza) is a fully human monoclonal antibody (IgG1) developed for the treatment of solid tumors. This drug was developed by ImClone Systems Inc. It was isolated from a native phage display library from Dyax.
On 21 April 2014, the US Food and Drug Administration (FDA) approved ramucirumab as a single-agent treatment for advanced gastric cancer or gastro-esophageal junction (GEJ) adenocarcinoma after prior treatment with fluoropyrimidine- or platinum-containing chemotherapy.
On 12 December 2014, the FDA approved ramucirumab in combination with docetaxel for treatment of metastatic non-small-cell lung carcinoma (NSCLC) with disease progression during or after first-line platinum-containing chemotherapy.
On 24 April 2015, ramucirumab was approved by FDA for the treatment of patients with metastatic colorectal cancer (mCRC) with disease progression on or after prior therapy with bevacizumab, oxaliplatin, and fluoropyrimidine.
On 10 May 2019, ramucirumab was approved by FDA as a single agent treatment for hepatocellular carcinoma (HCC) in patients who have an alpha fetoprotein (AFP) of > 400 ng/mL and have been previously treated with sorafenib. 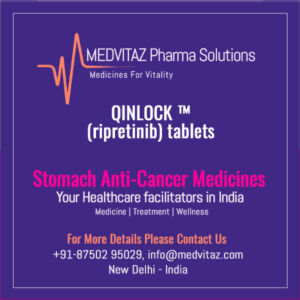